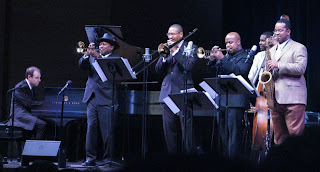 Go to a concert by a visiting jazz group or artist at Orchestra Hall these days and you're likely to see local musicians, even students, on the stage.

Before Marsalis and his band began to play, jazz historian and NYC deejay Phil Schaap introduced the High School of Performing Arts Jazz Band. Teen trumpeter Caleb Lockwood slicked down his pink Mohawk for the occasion and they all sounded great on "It Don't Mean a Thing (If It Ain't Got That Swing)" and "Savoy." A terrific opportunity for kids from an area charter school to play before a large crowd and meet an all-star band.

Maybe because this was my second narrated show within the same week (Beyond Category was the first), the Louis Armstrong tribute never quite clicked for me. Normally I enjoy hearing Schaap talk about jazz, but putting him to one side of the stage beside a big "Dr. Phil" sign and having him introduce each tune while pretending that Ruffins was Armstrong got old fast. (Ruffins didn't want to play along and eventually wandered off stage.) I understand that Ruffins was part of the show because he's a New Orleans legend and blows and sings Armstrong-style, but the band already had a great trumpeter, Nicholas Payton, and I wanted to see and hear more of him. 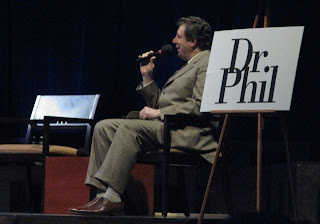 No complaints about the music—"Dippermouth Blues," "West End Blues," "The Sunny Side of the Street," Fats Waller's "Black and Blue," "Mack the Knife." Charmin Michelle did very well with "A Kiss to Build a Dream On," "That's My Desire," and "Do You Know What It Means to Miss New Orleans." She looked and sounded beautiful. (Marsalis called "Do You Know" the group's theme song.) 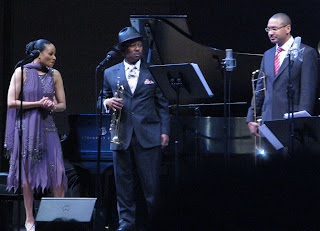 Throughout, the piano sounded muddy, which was too bad; I haven't heard Charlap play this style of music before and now I still haven't. People have said the Orchestra Hall Steinway is not a particularly good one. Dave Brubeck comes to play in May.

The high point of the evening arrived late in the second half, when Marsalis and Charlap played "What a Wonderful World" as a duo. Like "Somewhere Over the Rainbow," this song borders on the hackneyed. It seemed as though I was hearing it for the first time. Both musicians approached it with tenderness and affection.

The final tune was a Kermit Ruffins standard, "Skokiaan." There was an encore but we didn't stay for it.

High School of Performing Arts photo by John Whiting.
Posted by Pamela Espeland at 11:25 AM