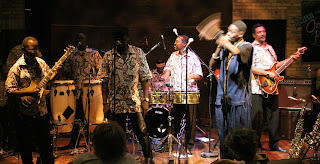 Like Snoopy’s doghouse, the stage at the Dakota seems to defy physics. Sometimes it’s just large enough to hold a piano trio; other times it expands to hold 12 musicians and their instruments. Tonight it’s 9.

Born in the 1970s, disbanded in the '80s, reformed in the '00s when an earlier album was reissued in the now-global music market, Orchestra Baobab is touring North America—theaters, festivals, and a few clubs. They’re at the Dakota for one night only, the curtain is open, and it’s a standing-room crowd. 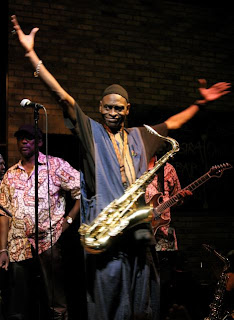 Gentle, persistent rhythms, beautiful voices, beautiful harmonies, the guitar rising above it all. Smooth, flawless Afro-Cuban fusion-pop spiced with rumba and soul. It’s too loud for some people (for me, not as loud as Maceo was) but I’m fine going along for the ride. It’s a long, generous set. People nod their heads and sway and some dance wherever they can find an open spot on the floor. 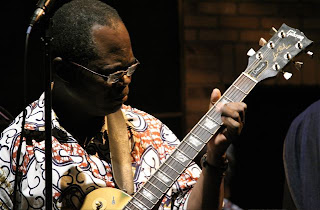 All night, dressed-to-the-nines African women approach the stage, open sparkly little clutch bags, reach in, and shower the musicians with money, sometimes handing it to them, sometimes tossing it into the air. The musicians take the money and stuff it into their pockets. 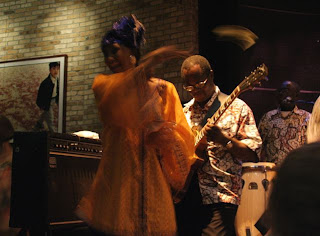 I haven’t seen this before and the musicians don’t seem at all surprised so I’m guessing it’s customary, similar to when Ruben Blades, playing the Pantages in 2002, ended his first set and rather than walking off stage came to the front to meet his fans, who were already heading down the aisles with LPs and CDs and photos to be autographed.

It makes me wonder how I’d feel if I were an expat or foreign student in a strange land, and Dave Brubeck or Terence Blanchard or Kurt Elling came through. If you want to get a sense of how diverse the Twin Cities can be, go to a concert by a big star from another nation. Also in 2002, Caetano Veloso performed at Northrop Auditorium and it seemed that everyone around us was speaking Portuguese. We felt like travelers in our own home town.

Watch a video of Orchestra Baobab. Note the size of that crowd.

Read more about Orchestra Baobab.
Photos by John Whiting.
Posted by Pamela Espeland at 12:30 AM