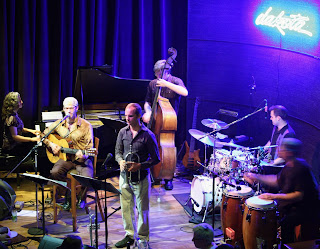 We last saw Everest in June and return with friends who drive down from Harris for a night at the Dakota. Mary Louise was a special guest with the band last time and that worked so well she’s here for the whole show tonight.

Some songs are repeats of what we heard in June, some aren’t: “Corcovado” ("Quiet Nights of Quiet Stars"), a Neapolitan song titled “If You Love Me,” a fresh and swinging arrangement of “On the Street Where You Live,” the Oscar-winning song from the film Motorcycle Diaries (written by a Uruguayan composer), a merengue from the Dominican Republic called “Bubbles of Love,” and several originals. Mary Louise performs a lovely improvisation during “La Mer” that starts slowly and picks up fire and steam.

It’s a solid show that might benefit from a little less saxophone in the future.

P.S. If you have seen photos of the Dakota before, you might notice something new: the big, blue, blindingly bright neon sign at the back of the stage. Point a digital camera at it and your LCD screen starts pulsing. Look directly at it and the word "Dakota" glows yellow behind your eyelids. We're told a dimmer is being made. Hurry, little dimmer!

Photo by John Whiting.
Posted by Pamela Espeland at 2:47 AM