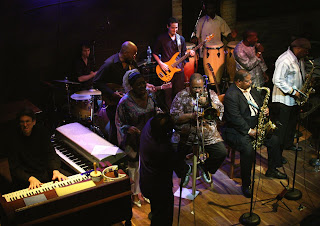 Hunh! You’ve got the music bug bad when you work flight reservations around concerts. SBSP was originally scheduled for Sunday the 24th so that’s when I flew back from CT. Then it was rescheduled for Monday the 25th. Thank God it didn’t move backwards a day or I would be in deep despair. 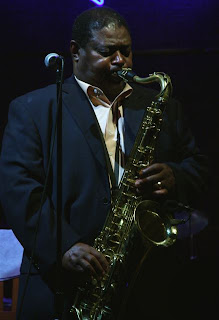 There are at least 10 people on stage at all times and the music never stops. “Soul Pride,” “Hot Pants Blues.” Congas, drums, a B-3, guitars, saxes, trombone, bass. Martha High, last scene in these parts with Maceo Parker, sings “Try Me” and “The Big Payback” (“Payback! Revenge! I’m mad!”). 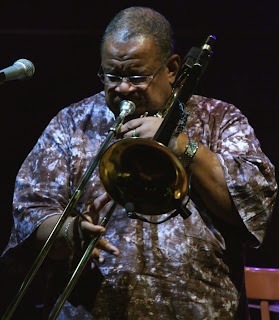 Pee Wee says, “Martha used to ride with us on the bus with no AC—back in the day, back in the day.” The amazing Cheikh Lo sings “It’s a Man’s Man’s World” with screams and Senegalese lyrics. “Make My Funk the P. Funk” (“I want my funk uncut”). People in the audience get up and dance. 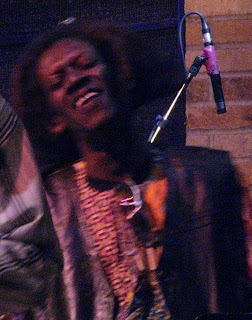 Funk and grooves and African beats and American R&B, gospel and romance and revolution. Gorgeous greasy slip-slidey horns. Pee Wee’s proclamation: “We have a burning desire to please you.” The great “Still Black, Still Proud,” which doesn’t sound at all out of place in a room full of mostly white people because some things really have changed for the better, and suddenly I think maybe Obama can win this thing after all.

Encore: A laid back and easy “I Feel Good.” I knew that I would. That’s why I came home.

All photos but the last by John Whiting.

Posted by Pamela Espeland at 3:44 PM