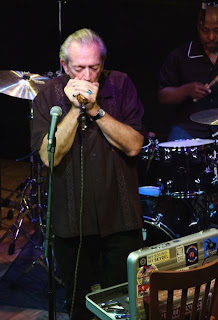 Rangy and seamed, looking older than his 64 years (something about a long battle with alcohol), Charlie Musselwhite steps through the curtain and turns the Dakota jazz club into a roadhouse.

Lanky girl, man, she’s long and tall
Sleeps in the kitchen with her feet out in the hall

The Dakota is booking more blues lately, which draws a different crowd but doesn’t sit well with some jazz fans. After the revelation that was Eric Bibb, I’m fine with it, and it helps keep the doors open.

Blues, why you worry me
Why you stay so long?
I used to drink to keep from worrying
Now I ride from town to town

Musselwhite has a metal briefcase full of harps. When he’s not playing he’s singing the blues through a big happy smile.

With jazz, especially experimental jazz, you never know what will happen next. The blues has a form that’s as familiar as a sofa—line, repeat, new line. Because it’s repetitive, it can get a little trancey. So you listen differently, nod your head differently, tap your feet differently, and get into the story, most often a tale of heartache. Even in Brazil, where Musselwhite went to hear the blues and, he tells us, brought a little back, “they’re singing in Portuguese but if you translate they’re all singing ‘My baby left me.’ It’s a worldwide situation.” 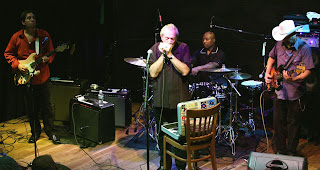 “If I Should Have Bad Luck” hits me; it’s one of the saddest songs I’ve ever heard. The melody is bouncy but the lyrics are killer. Will love save him? What do you think?

If I should have bad luck a long long way from home
Honey I know your love will keep me going
Passing people’s houses on a dark and lonesome road
Look so cozy, places I can’t go…
I can see everybody’s people but I can’t see mine

Musselwhite's voice is low and rumbly, weary and knowing and conversational, and I love how he plays the harmonica, which speaks its own wild and expressive language. Thank you, Charlie, and John Hammond Jr., and Howard Levy, and dearest Toots Theilemans, for helping me to hear the harmonica, which I dismissed as a child’s instrument for years because I had one as a child.

Is “The Blues Overtook Me” a song about childhood depression, or about learning early what your path in life will be?

When I was a kid, early on my own
I took the highway to be my home
But the blues overtook me when I was a little child
You know fast women and whiskey made this lonesome boy wild

Later I read that Musselwhite has won a metal briefcase full of W.C. Handy awards and Grammy nominations. He went off the sauce in 1987 and he’s proud of that. “I’ve had people who’ve had problems with alcohol talk to me about quitting,” he says on his website, “and tell me that I inspired them to quit.”

The set ends with a slow and achey ballad, “a tune I recorded in 1966, still a good tune.” It begins with a harp solo and turns into a wordless story. I head into the lobby after to buy a CD and have it signed. There aren’t as many people out there as I expected, or as there should be.

Posted by Pamela Espeland at 12:15 AM