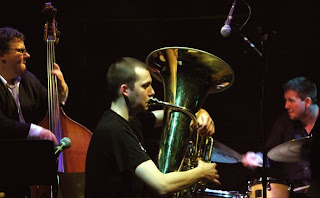 I’m already a fan of Kac (say “cats”) and Linz; I haven’t seen Hennig as often but he’s growing on me fast. So I’m eager to hear what they do.

The tuba-led trio is such a rare configuration that it deserves attention. But what form does it usually take (if there is a “usually” about it)? I’ve read about tuba-piano-drums (Bill Stewart, Rod Williams, Billy Hart) but tonight’s tuba-bass-drums may be a first.

In the early days of jazz, the tuba was the bass (replaced by the upright bass when sound recording technology improved). So Kac’s new band is essentially a trio of two basses and drums.

Is it musical? I think so. You have to lean into the sound; the tuba has a greater range than you might expect, and a warmer tone, and subtlety. There’s nothing marching-band about the originals and standards we hear tonight. (Kac doesn’t talk on stage and “Name That Tune” is not my game, so I can’t include a playlist here.)

But it’s a lot of low notes. Even though Kac often plays on the high end of his instrument, what’s high for a tuba feels low to the senses. So I find myself craving a little brightness—a piano, maybe, or a saxophone. Some jazz tubists (Jim Shearer, Jim Self) have recorded with harmonica and guitar.

So I’m not sure this trio is entirely successful. Which is not to say I’m sorry we’re here; I’m not, and when they play again I’ll probably go to hear them again. I like these musicians; I trust them to play well and take chances.

We stay through the final tune of the last set. On the way out, we meet Stefan’s mom, Rachael, in the lobby. “Some tubists today are rebelling,” she says. “Not only do they want to lead the band, they want to play the melody.” 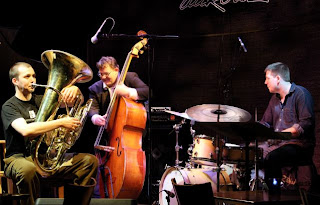 • Kac is famously taciturn during live shows but garrulous as all get-out on his blog. Opinionated, too.
• Want to know more about the tuba? This segment Christopher Lydon recorded for his Open Source podcast/blog is full of tuba facts, history, lore, and music. At one point, classical and jazz tubist (and pediatrician and author) Eli Newberger talks about when and why the upright bass replaced the tuba in jazz bands.
• Read a lively discussion about tuba as a jazz instrument. (Note the link to one of Kac’s other bands, the Pan-Metropolitan Trio.)
• Photos by John Whiting.
Posted by Pamela Espeland at 12:01 AM