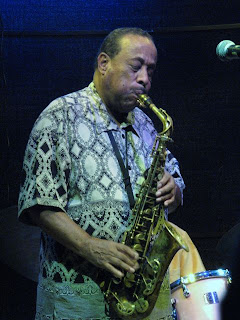 The last time we saw Lou, in August 2004, he brought the same drummer (Tainaka) but a different guitarist (Randy Johnston) and B-3 player (Dr. Lonnie Smith). Tsuruga is Smith's protege and Johnson has played with Donaldson in other organ combos.

A bebop and hard bop legend, Donaldson is still blowing strong. His facial expressions are nearly as interesting to watch as his saxophone is to hear. He mugs. And he talks to the crowd in between songs, something I generally like unless I hear the same patter two nights in a row. That did happen in '04 so we're coming to just one set this time around. 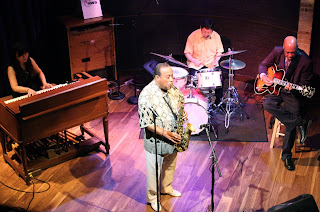 "Stella by Starlight," "The Best Things in Life Are Free." Donaldson asks the crowd if anyone can name the #1 song of all time. Someone says "Alligator Boogaloo," a tune Donaldson penned. He smiles and says "Wish it were. I'd be in the Bahamas with two or three women sitting on my lap drinking Pina Coladas." He plays the real #1, "Somewhere Over the Rainbow." Then "Gravy Train," another song he wrote ("I used to name all of my tunes after food"). A lovely "Bye Bye Blackbird." (How did that song and "Someday My Prince Will Come" become jazz standards? A question for an expert...Phil Schaap?)

"Things Aren't What They Used to Be." A hilarious version of "I'd Rather Drink Muddy Water" ("I'd rather smoke crack...eat chitlins without hot sauce"), and a story about buying his woman a wig from Woolworth. Then he's gone, having told us a bit earlier that "it's inspiring to get a nice reception, but we cannot forget I am approaching 82 years old and an intermission is needed."

He turns 82 in November. We're seeing a lot of elderly jazz artists lately. Long may they roam.