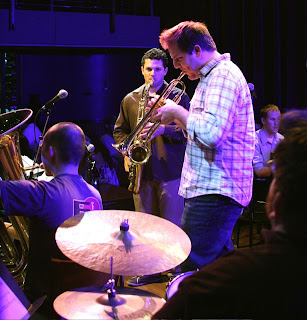 When a new band (like Ingo Bethke) starts up, it doesn’t consist of people who moved here yesterday. All are in other bands, other configurations, playing various types of music around town. Kelly Rossum thinks this is part of what makes the Twin Cities a thriving jazz community—the opportunity to play all kinds of music with many different musicians and some of the same musicians as they move from band to band. I'd add to that the opportunity to listen. For example, hearing Bryan Nichols play with Connie Evingson is not the same as hearing him play with Michael Lewis. 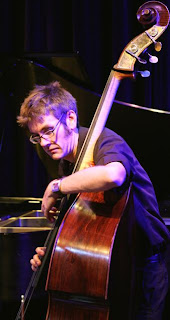 Everyone in Ingo Bethke plays or has played in other bands around town. (They all played together formerly in a band called The Journey.) I’ve seen Shilad Sen with Snowblind and Stefan Kac in a surprising number of places, considering he plays the tuba, not an instrument many people associate with jazz.

We hear an extended composition by Kac—“Lights of Loveland,” I think it was, for which he recently won an International Tuba Euphonium Association award. Something by Buster Williams. Something that sounds like the soundtrack to a Fellini movie with carnivals and masks. Gilbertson's "Chaos Theory." Another Kac opus, "Caitlin's Tune." An Ornette Coleman tune. Solid straight-ahead stuff, too.

Sometimes the tuba is so low you can barely hear it, like distant thunder.

About the name Ingo Bethke: One of the band members (probably Zielinski) tells the story of how Bethke was a German who busted his brother out of East Germany in 1988. Is it true? There are stories about Ingo and Holger Bethke on the Web but they’re in German. Zielinski has a thing about the Cold War; read his MySpace bio to learn more about that. 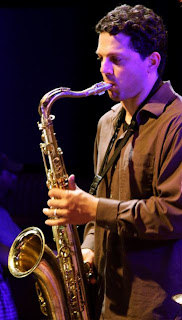 I like the sound of this group. It’s an interesting blend of instruments; a tuba always adds dimension and something else I haven’t yet figured out how to define/describe. It’s like a foundation for the rest of the music, but a foundation with open spaces. The notes linger and sigh and unfurl.

The music is inventive but not too out there. More or less what I expected after I saw Ingo Bethke on the schedule for a free concert in a Minneapolis city park earlier this summer. When people are walking and biking in you can’t feed them a big helping of avant-garde jazz. 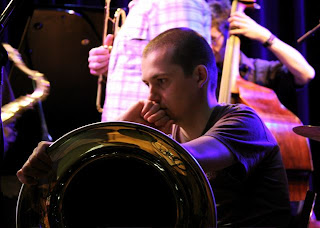 Photos by John Whiting.
Posted by Pamela Espeland at 3:00 AM