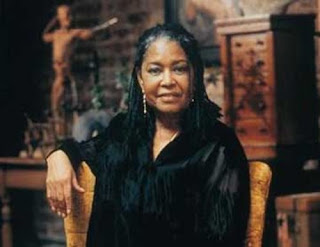 August is the birthday month of jazz vocalist, songwriter, and composer Abbey Lincoln. KFAI executive director and program host Janis Lane-Ewart featured music by Lincoln on all four of her "Collective Eye" radio programs this month. I was her guest on the August 28 show, which is available for streaming now through September 11.

I didn't know much about Lincoln until recently; Janis says she is underplayed and underappreciated. During the past few weeks I've been listening to several CDs: Abbey Is Blue (1959), Straight Ahead (1961), The World Is Falling Down (1990), Devil's Got Your Tongue (1992), Who Used to Dance (1996), Abbey Sings Abbey (2007). I love her big voice and personal sense of timing, the unusual way she attacks words and phrases and the emotion with which she sings.

Jazz is full of discoveries to be made and catching up to do.

Lincoln had heart surgery last year and her performance at this year's Montreal Jazz Festival (her long-awaited debut there) earned reverent reviews that also noted her thinness and frailness. She will be a special guest at the Iridium Jazz Club in NYC from October 31–November 2. I wish I could be there.

Read and hear a profile of Abbey Lincoln at NPR.
Her page at Verve, her record label.
Photo from her photo gallery at Verve.
Posted by Pamela Espeland at 2:50 PM