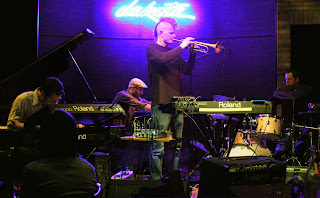 When I talk with Kelly the week before this late-night show (for a MinnPost preview), he's not yet sure what it will be. "The trumpet won't sound like a trumpet, and the piano won't sound like a piano," he says. And the music will be...? "Not outside, just over there."

He explains that "circuit-bending is a technique where you physically alter an instrument. For example, you might take an old Casio keyboard, pop the top and rewire the circuitry." Craig Taborn does this, too, but until now I had no clue what it meant. 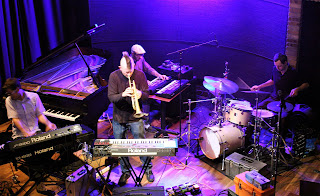 Tonight's first set is an hour long, without interruption. I strap in and hold on. The second set is shorter and also satisfying. As with any set involving a lot of electronics, there's a lot of pedal-pushing and dial-turning and button-adjusting, with wires snaking everywhere onstage. I can't always tell which sounds are coming from which instrument but I don't much care. The sound is good, the vibe is good, we're all having a good time. A quote from "Caravan" floats by, and other bits and pieces of tunes I think I recognize but can't name. Something reminds me of Miles Davis's "Tutu."

Not outside, just over there.

Photos by John Whiting. Aieeeee, the neon sign! A dimmer, we're told, is imminent.
Posted by Pamela Espeland at 6:45 AM