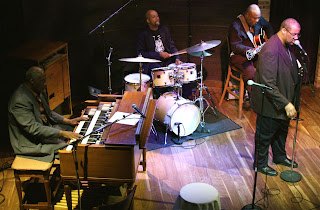 We try to see Kevin Mahogany whenever he comes to town. There aren’t many male vocalists and his velvety baritone is delicious to hear.

The Joe Turner gig seems to be his thing right now; his main website hasn’t been updated since July 2007 and he has a newer Kansas City Revue site. In the Robert Altman film Kansas City, Mahogany plays a character based on Turner.

Tonight’s set, the last of four in their two-night Dakota stay, begins with the Godfathers (formerly the Masters of Groove) on their own. They make it sound and look so easy. (Throughout the evening, Grant Green Jr. is especially fun to watch, his face joyful and expressive.) Mahogany comes through the curtain and starts with “Times Getting’ Tougher than Tough” (“Things are getting rougher than rough/You know I make a lot of money but I keep on spendin’ the stuff”). He swings, he scats, he’s relaxed and easy and fine.

On “I Want a Little Girl to Call My Own,” the crooner becomes a belter, singing in his higher register with more of an edge. The velvet is back on “Teach Me Tonight.” Wilson’s B-3 makes that wonderful popping sound. 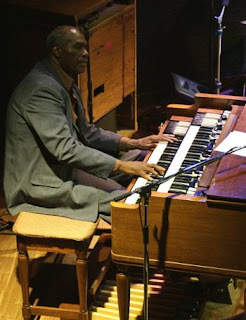 “I’d Rather Drink Muddy Water” turns into a scat-and-drums dialogue; Mahogany becomes a drum set, singing sticks and brushes, snare and cymbals. Lewis takes a long solo and the song transitions into “Every Day I’ve Got the Blues,” during which Kosins comes on stage. She scats, too. I enjoy hearing the two of them together. Mahogany exits and heads for the bar, leaving Kosins on stage to carry two or three tunes.

Mahogany returns for the close, praises his band (on Wilson and the B-3: “Taming that beast is not easy”), and gives us “Route 66” and “Since I Fell for You.” The first set ended with a rousing encore, but there’s no encore for the final set. Frankly, this crowd doesn’t deserve one.

There has been a weird vibe in the room for most of the set. It’s far from a full house and people have chosen to sit away from the stage; there’s no one up front, which Mahogany comments on and clearly doesn’t like. He tries to engage the crowd with patter and gets nowhere.

I’ve seen him before larger audiences, most recently with the JazzMN Big Band. Those were high-energy, generous, exciting shows. Some performers ignore their audience, some soldier on despite crowd noise or indifference, but some—including Mahogany—seem to need what an audience can give: respect, attention, enthusiasm, love. Hand him that and you’ll get a lot in return. Tonight’s crowd is flat, unresponsive, and lazy. Too bad for everyone.

Photos by John Whiting.
Posted by Pamela Espeland at 2:45 AM