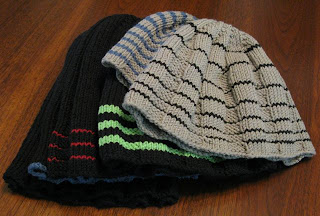 I've been making hats but not finishing them (i.e., tying in the annoying ends). Recently I took several to my LYS and did the dull deed in pleasant company. The bottom left, all-black hat goes to Leon Brown. Black with thin blue border: Vincent Gardner. Black with thin red stripes: Carlos Henriquez. Brown, Gardner, and Henriquez were part of Irvin Mayfield's sextet when they played three nights at the Dakota in March. Black with wide green stripes: I'll hold onto that one and decide later who gets it. Gray with blue stripes: honorary cat HH. Gray with black stripes: Gordy Johnson. When we saw him at D'Amico Cucina in July, I asked if he would like a hat and he said yes. Not everyone wants a hat. Some people don't wear hats. Some think there's a catch--that they will owe me something. No catch, just karma.
Posted by Pamela Espeland at 12:48 AM

Email ThisBlogThis!Share to TwitterShare to FacebookShare to Pinterest
Labels: hats, Hats for Cats