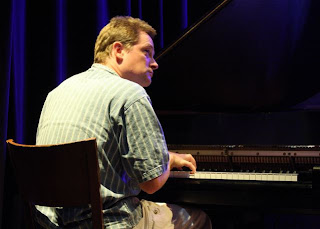 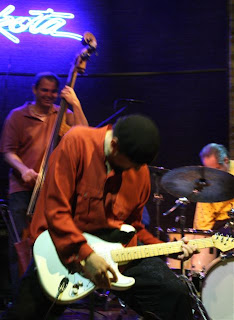 The longer they play, the happier Magraw becomes. I learn later that this is the first time his trio has played with Carrothers, and Magraw loves every minute. (Toward the end of the evening, he sits behind Carrothers, points at him, looks out at the audience, smiles from ear to ear, and says “Bill Carrothers! That f****** guy!”)

The music is amazing. Playful, creative, tuneful. Blues, standards, Monk’s “Let’s Cool One.” Improvisations during which Epstein plays the edges of his cymbals with knitting needles, or something close to knitting needles. Magraw and Carrothers negotiate with each other about what to play, and no matter what they decide, Bates anchors it and holds it steady. 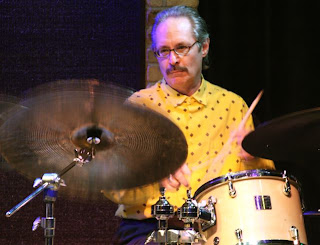 As the evening progresses—this is after all the late-night show, this is Minneapolis—the audience becomes smaller and more devout. An exquisite solo from Carrothers ends it all. That guy. 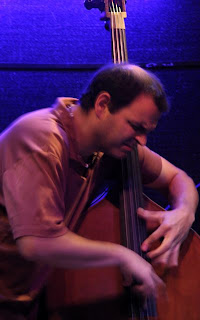 Photos by John Whiting.
Posted by Pamela Espeland at 7:00 AM