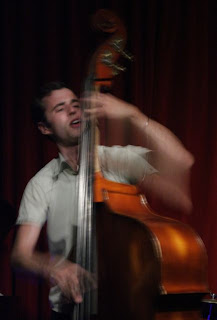 Dave King is playing at Maude? With Nichols and Thomson? Let’s go.

Turns out Morrissey wrote all the music the band plays tonight. I learn more from talking to his mom, who’s sitting with her good friend Mike Lewis’s mom, that he’s 27 years old, went to West Tonka High, played pop with people like Mason Jennings and Haley Bonar, has made the switch to jazz, and is recording a CD at Pachyderm in the woods of Cannon Falls (where the Bad Plus just finished their latest), after which he will move to NYC.

The crowd is yabbidy, the norm here, but a significant number of people are listening hard to the music, which is a bit Bad Plussy but with sax. Not much swing but lots of melody and energy, with big solos for everyone (including an especially nice one by Nichols at the start of the second set). Scott Fultz is in the house, as is Eric Fratzke of Happy Apple, celebrating his birthday.

The room fills with music. While performers at Maude usually end up playing background music for at least part of the evening, you never get the sense that’s what they’re here to do. They’re playing how they would normally play, not holding back, and when and if you decide to listen or the crowd thins, you’ll be rewarded. 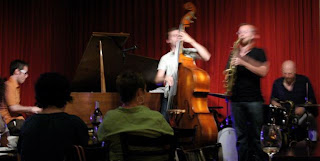 Nichols tells us later that “Chris Morrissey is writing some of the hardest music in the Twin Cities.” I'm hoping there’s a CD release in the near future and it’s somewhere like the AQ or the Dakota.

• Morrissey has a MySpace page with no music. What's up with that? He’s letting a “guest blogger” called the Jazz Salamander write his MySpace blog. Meanwhile you can read some of his own older writings here. Nice.
• Photos by John Whiting. Like all photos taken at Maude without flash, they’re a bit…impressionistic. There was someone at Maude taking photos with flash and a tripod. He probably got some good ones, since he was going flashflashflashflashflashflash for much of the evening. We thought he was with the band but he wasn’t. In that case, what a jerk.
Posted by Pamela Espeland at 1:30 AM