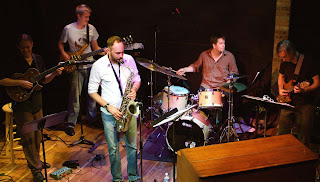 The idea behind Monk in Motian: to interpret the music of Thelonious Monk as interpreted by drummer Paul Motian, who played briefly with Monk and in 1988 released an album called Monk in Motian.

Have we come full circle? Nothing about Monk is that easy.

An interesting choice given that Monk was a pianist.

It’s a late-night show at the Dakota and the crowd is good. I have enough trouble remembering the names of Monk compositions when keyboards are involved, but I hear familiar phrases. When I ask a friend, “What was that tune?” the answer is “Ask Me Now,” a “Who’s on first?” response that also happens to be the name of the tune.

The music is complex and satisfying, quirky and layered, full of Monkish twists and turns. The group works hard to play it. The person who seems to be having the most fun is Hennig at the drums.

Monk in Motian (the group) has a MySpace page with several selections (“Evidence,” “Brilliant Corners,” “Misterioso,” “Oska T”) I’m assuming were recorded at the show we saw. They’re scheduled to play the Dakota late-night series again on October 10. Let's hope that means the group is a going concern. I want to hear more.

Photo by John Whiting.
Posted by Pamela Espeland at 12:05 AM