Double Bill at the Buddha 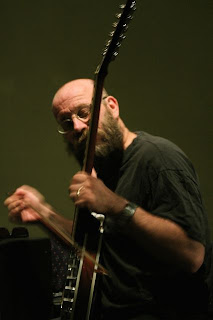 I’m trying to remember the first time I heard and really listened, or tried to listen, to free jazz (a.k.a. avant-garde, outside, vanguard, experimental, unstructured…or none of the above). It might have been in February 2000, when the Cecil Taylor Quartet came here as part of the Northrop Jazz Season. That concert was memorable for two reasons: the music, which was crazy, and the speed with which much of the audience exited during intermission, never to return.

But I liked it. At the Montreal Jazz Festival in 2001, we sought it out and found pianist Lee Pui Ming performing with saxophonist and vocalist Joane Hétu and clarinetist Lori Freedman. I wasn’t packing Moleskines back then so I don’t have notes. I remember hair flying, someone wearing a kilt, silences, maybe shrieking. The specifics of the music escape me. The emotional memory remains: I was happy. Perplexed, challenged, out of my depth, and happy.

Because I like being happy, I go to see and hear musicians and groups like George Cartwright and Happy Apple and Anthony Cox and Fat Kid Wednesdays and Douglas Ewart. When Chris Bates sends out an email saying “This will be interesting, trust me,” I do. They all live here, thank goodness.

I also keep watch for people like Craig Taborn and Tim Berne, who come through here occasionally but not often enough for me. Hank Roberts, hurry back. And the annual Minnesota Sur Seine music festival is a mother lode of squeaks, squawks, wails, caresses, indistinguishable melodies, indeterminate rhythms, and sheer transporting joy.

Chris sent out an email earlier this week, which brought us to the Rogue Buddha shortly before 9 p.m. last night. He and Adam Linz were standing outside talking and let us interrupt them. Inside, the crowd was small, maybe 18 people to start and five were with the bands and many of the others were musicians; we saw Scott Fultz, Pete Hennig, Park Evans, Joe-who-plays-guitar-and-things, and others I recognized but can’t name. Former City Pages and Strib music writer Jim Meyer had driven up from Farmington, where he now lives. For a while, I was the only girl in the room.

During the first set, my focus was often on Paul Metzger, who played a modified banjo: seven (?) extra strings, electronics, and who knows what else. For much of the time, he bowed it. Sometimes he used a plectrum or strummed with his fingers, and sometimes he played it like a tabla. I had never heard a banjo make such sounds before. I thought the banjo was boring except when played by Béla Fleck (and mostly I like him with Edgar Meyer). I don’t think it’s boring anymore. 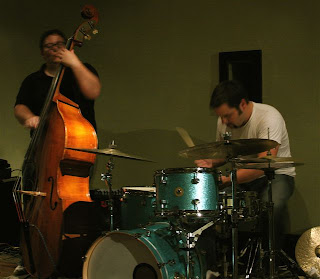 The J.T. Bates/Linz/Metzger combination played one long piece with slow parts and fast parts, solos and duos and trios, crescendos and decrescendos. The music came in waves. No melody, no regular rhythm, just flow. Banjo, drums, bass, banjo-drums, bass-drums, banjo-drums-bass. I thought of riding rapids, hanging on and hoping you’ll make it safely to the end and getting bounced around on the way. HH said it was like tasting wasabi for the first time. Linz plucked and bowed and patted his bass. J.T. fell into his drums and brought forth rhythms wild and strange. At the end, I asked, “Did that have a name?” J.T. said “No.” Of course it didn’t and I knew it didn’t but I wondered if he would make one up.

After a break and more $2 wine: Volcano Insurance. Their music was more mellow than I expected from the name. Polipnick’s guitar was dreamy and delicious. I thought I had seen him before and made a mental note to look him up when I returned home. Yes: in April at the Clown Lounge with Tatsuya Nakatani and Chris Bates. 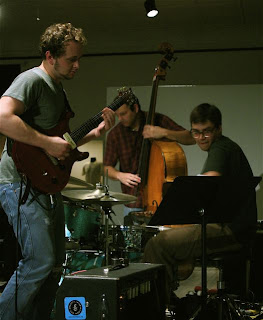 Their final two pieces were fiercer, more fiery. For one, which Polipnick introduced as “a new ditty called ‘Calisthenics,’” they actually had a chart. They sometimes play from a setlist, so they’re not entirely about improvisation.

What did they play? I can’t tell you. But I was there for the energy, the creativity, the inventiveness, the fun…the ride, the wasabi, the surprise.

Whenever I try to write about free jazz, I wonder why I bother. It’s hard enough to write about music that has a form and structure. Or to write about a singer who uses words I can understand. This improvised, in-the-moment stuff, with altered banjos and pedals on the floor and wires and instruments that don’t even sound like themselves—who even cares if anybody writes about it? It will never be heard again. It won’t be replicated, and it can’t be bought and played on your stereo or iPod. It’s not only far out, it’s gone.

But I realized last night, while scribbling notes in an effort to capture a fleeting sonic moment, that one reason I write is to entice. Maybe someone who reads this will wander into the Rogue Buddha for live music sometime, or check out the Clown Lounge on a Monday night, or set aside time for an Improvised Music at Homewood Studios event. When that happens, I’ll be even happier.

For more on writing about free jazz, see Lyn Horton’s excellent article, “Shifting the paradigm and using ‘free-jazz’ to do it.”

Posted by Pamela Espeland at 7:09 PM