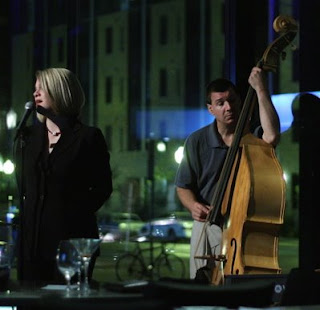 I write about Cue at the Guthrie for MinnPost and decide to experience it as anyone else might—eat dinner, drink wine, hear the music, not take notes. So I can’t tell you what Maud sang or her band played, just that the whole Cue thing is genuinely delightful. It’s a beautiful place that treats its guests well and also its performers, according to Maud and Arne Fogel, who are both regulars there.

Later I learn that Melissa Gilbert was sitting behind us; she’s starring in the Guthrie’s Little House on the Prairie musical, not as Laura Ingalls Wilder (the role she played in the TV series) but as Caroline “Ma” Ingalls. Advance ticket sales for Little House broke all previous records at the Guthrie and the run has been extended. I’m glad for them but you couldn’t drag me to that show in chains.

At Cue, we enjoy a Maud Hixson wine flight (we choose the “classic, soft, and sultry reds") and delicious food. Manager Jeffrey Fisher and sommelier Jessica Nielsen stop by to say hi. Maud and her band sound great and look wonderful against the backdrop of the floor-to-ceiling windows and darkening city sky. 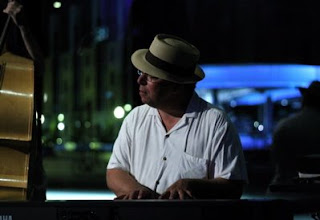 Arne has since told me that jazz at Cue has been extended through December of this year. Long may it continue.
Photos by John Whiting.
Posted by Pamela Espeland at 2:49 AM