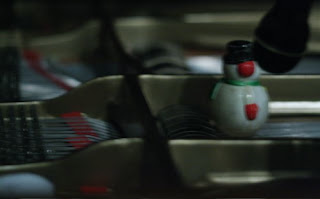 I’m not much into indie/experimental pop/rock except where it intersects with jazz, but I saw Tim Glenn play recently with Kelly Rossum at the Dakota, Glenn is with Fog (along with Andrew Broder, who gave a memorable performance at the Cedar with George Cartwright), and I’ve seen good music at Maude. Plus (now former) City Pages writer Jeff Severns Guntzel wrote a glowing feature on Martin Dosh back in April that made me really, really want to see him.

So we go, up for anything and hoping the grilled Brussels sprouts are back on the menu.

Guntzel loves Dosh and Philip Bither at the Walker loves Dosh and Mike Lewis loves Dosh but a half-hour goes by, we’re sitting right in front of Dosh and Glenn eating crab cakes and corn chowder (no Brussels sprouts yet; probably in the fall) and I’m not feeling the love. Dosh is wearing headphones, looping and recording. Glenn is doing something with wires and knobs and a computer. They could be anywhere, we could be anywhere.

For me, live music means two things, and they don’t have to occur simultaneously:

I’m not saying that performers have to smile and dance and tell stories and take requests, or that the audience must be rapt and silent except for bursts of applause, but there should be some connection. I could be watching Dosh and Glenn on television, or from outside Maude looking in through the big window, or through one-way glass in a police station.

Maybe it's an off night for them, maybe it's just me…but the crowd is smaller than I've seen on a Saturday night at the normally hopping bistro. The usual complement of jazz musicians and moms isn't here. It could be packed with other indie musicians and I wouldn't know, but no one seems to be listening very hard.

We stay for one set (actually one extended, repetitive piece), pay our bill, and leave. The photo is of the snowman inside Dosh’s prepared piano. Blurry and indistinct, like the evening.
Posted by Pamela Espeland at 12:07 AM