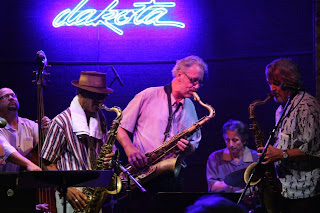 We miss Carei Thomas’s 70th birthday tribute at the Walker but stick around the Dakota for the after party.

The Walker performance was called “Gift Shop,” a concept Thomas developed during his recovery from Guillain-Barre syndrome, when he began to reflect on the gifts of professionals and ordinary people. He told the Walker: “I see Gift Shops serving as energizing entities in the community whenever there is a need to reinforce the human spirit.”

Not everyone from the Walker comes to the Dakota, but we hear several performers in a series of configurations: Thomas, Brock Thorson, Steve Goldstein, Jimmy Thorson, John Devine, J. Otis Powell!, Tim DuRoche, George Cartwright, and many more. 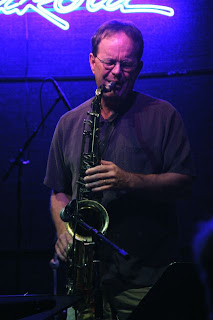 First up, three saxes, just three saxes, and their strong, steady blowing clears the air for what is to come. J. Otis Powell! reads a poem about music accompanied by Carei Thomas on piano, Cartwright on sax, and drums. (Saxophonist Cartwright opens by saying “I would just like to say a couple things—there was a concern I might say too much,” then backing away from the mike. You can always count on Cartwright for a bit of dada.) J. Otis’s poem; in part:

Thomas reminds us collectively that “We are not as bad as we think we are, nor as good as we sometimes boast.”

Then DuRoche on drums, Brock Thorson on bass, Steve Goldstein on laptop computer. Members of the poetry/jazz ensemble Ancestor Energy. (There's a group that needs a Web site or at least a MySpace page.) Someone plays the bassoon as if it were a bazooka. Sister Mary Harris plays and sings a song she wrote, “Where I Am Today.” Someone plays a midi saxophone (EWI?). The music is outside, free, improvised, sometimes melodic, sometimes in your face, not ever dull.

Toward the end of the night, oddly, a heckler arrives. “Back in my day, we played real instruments!” he shouts at Goldstein. And “Xbox! Whatever! I’ll get up there and show you some music! Whoa! Whee! Get the hook out!” Everyone ignores him.

Read Thomas’s description of his own career on Minnewiki.
Photos by John Whiting. (It’s still the first night of the Dakota’s new neon sign. My eyes! My eyes!) Top: Three saxes and more. Next: George Cartwright.

Posted by Pamela Espeland at 2:49 AM